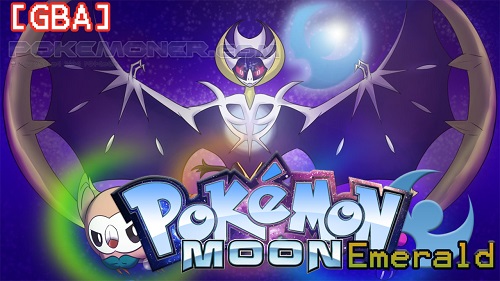 Name: Pokemon Moon Emerald
Remake From: Pokemon Emerald
Remake by: Lukagba
Source - credit: Pokemonsaves.blogspot.com
Description:
The story is the same as Pokémon Emerald, several Pokémon from 7th Gen and Alola Forms were added. The purpose of the hack is to make a Sideshow Showcase based on Emerald, which has all Alola Pokémon captures.

Characteristics:
-Initials are: Litten, Rowlet, Popplio (All are capturing, see doc).
-All Pokémon of 7th Gen (Status, scams, official etc).
-All the Alola forms.
-Contains pokémon of the 1st-7th gen (in a mixed way, not all!).
-Amaura and Tyrunt replaced by the Root and Claw fossils respectively, to be revived.
- Legendary Kyogre, Groundon, Rayquaza replaced by Lunala, Solgaleo and Magearna.
"Fairy type."
-New Strokes to the 5th gene.
-Some new blows from the 7th Gen.
- Physical and special blows.
-Value of evolutionary stones in Mauville and Lilicove.
-Mega Evolution: Evolve with mega stone, buy in Lilicove.
- Pokémon that evolves by exchange evolve with the item Cable Link (Lilicove).
-All Eevvee evolutions (See notes).
Pokémon of Gyn Leaders and E4 changed: E4 Has Megas, were slightly hampered, from the 5th gyn, all GLs have 6 Pokémon.
-Ash-Greninja is the Mega-Evolution of Greninja.
- Day and Night System.

- Some Pokémon learn TMs or Egg Moves by Level.
-Lucky Egg can be found with wild pelippers as in Oras.

-Beta v0.53:
-Added evolutionary line of Pikipek> Evolve Lv 14 and then Lv 28 (the sprites are still not 100%).
-Rocktuff evolves on Lv 25.
-Mega Evo of Lucario corrected.
-Grubbin now evolves on Lv 20 to Charjabug, and to Vikavolt when he is up in New Mauville. (Similar to the official game).
-Correct Leader items.

-The Mareanie sprite is not 100% correct, it will be fixed soon!
-Thanks to Tig Vieira for Mareanie's BackSprite. 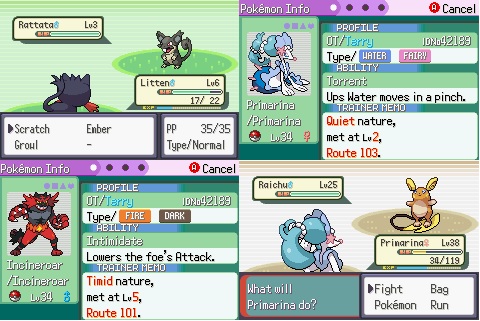